I've played a lot of music during my lifetime, and I'm sure it's kept me out of a lot of trouble (or at least I got in less trouble than I would have otherwise). Currently I'm working on 3 different music projects, when I have time.

Currently my main musical focus (as of now consisting of only two finished songs) is a series of heavy metal renditions of old monster movie theme songs. In some ways I feel that many monster / horror themes were the first heavy metal songs, predating Black Sabbath, etc, by decades (ask me more about this if you care).

The version of Godzilla I interpreted was composed by Akira Ifukube for the original 1954 Toho Godzilla (aka Godzilla – King of the Monsters! if you're American). I also included my interpretations of Godzilla's original footsteps and roar from the movie's title sequence*.

And though I would describe the movie simply as “OK” (I rated it 3/5 stars on Netflix), it is what first inspired this whole series of heavy metal horror themes.

Godzilla's original roar (by Akira Ifukube) was made by rubbing a rosin-covered leather glove along the down-tuned strings of a double-bass, and his stomp was made by bashing an amplifier that had a reverb tank.

If that's not heavy metal than I don't know what is. 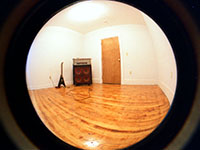 My axe and the doorway to Hell.

Other than the random occasional recording I may do, the most broad solo project currently in progress is basically a bunch (over 2 hours worth) of heavy metal guitar parts; many overdubbed with drums and multiple guitars. As of now, that's all they are, but hopefully will one day be composed into complete songs.

At the Juice Bar; photo by Dawn Lynch
This was my band during high school in which I played bass with my friends Nate Barlow (guitar; formerly of No Such Luck) and Rick Carpenter (drums).

The band formed from a project Nate and I had been working on, called N², which turned into 8-bit after Rick joined. We played together as 8-bit for about 2.5 years. In that amount of time we drank SO much Coke and played a bunch of shows; basically just had a lot of fun.

Also in that time we released a demo tape and recorded a 13 song LP that never got released officially (probably because the recording was the last time we really played together).

Lucky you though! You can download both recordings right there -->
And with lyrics too!

There were also some 8-bit side projects, including a hardcore song about Skeletor's Slime Pit, and an electronic song about battling dinosaurs.

Somewhere in my vaults I also have dozens of our live recordings.

We disbanded in July of 2002 as Rick was going to South Carolina (I think) to become a Marine, and Nate was going away to college at Clarkson University in upstate New York.

Now You're Playing with Power

The Napkins was a band I was part of (bass) and included my then-roommates, Craiger (drums; formerly of The Fleece) and Eben Portnoy (guitar and vocals; formerly of No Siento, The Fire of Life Orchestra; currently of Flying). Unfortunately, we sold our souls to the devil for fame – not realizing that it would eventually lead to our bloody deaths, one by one, in front of jam packed stadiums.

The Napkins, formed in the spring of 2002, are dedicated to communicating with each person in a special way. Our medium is the song and our goal is to reach across time, space, and social barriers to touch you. We wish to expose to you our inner-most selves; to open up and donate ourselves for your stimulation.

We Want you to experience the phenomenon called Love. Love pervades all thoughts and exists everywhere today. We are all living in a unique place and time where we can communicate love across such great distances. We want to use our music to establish [a] long-distance emotional link with each of our listeners. The more willing you are to receive and accept this feeling we have so much of in our hearts, the more we can offer.

The Napkins Give Blood

The Monsters was probably the first truly serious band I was in. It was comprised of myself (vocals) and two of my closest friends at the time—Andy Ianello (drums) and Zac Davis-Kelly (guitar).

Zac, Andy and I used to skateboard just about everyday together in middle school, until one day Andy broke his leg, leaving him immobile. More than anything, this is probably what lead to the band becoming any more serious than any of the other music we had been playing at the time. We practiced almost everyday in an old converted barn in my backyard (known as the "Scary Barn") and, fittingly, played our first show at a basement Halloween party.

As might be expected, our lyrics were mostly about monsters and horror, etc.

We recorded some low-budget tapes and created our own "record label" on which to release them, named Scary Barn Records.

Though most of the shows we played were small, local punk shows, we had a highlight when we got to play with some larger, well-known punk bands from Boston (The Freeze, The Showcase Showdown).

I can't mention enough here how much positive support we got from a lot of the older people we knew at the time. The local record shop where Zac and I used to hang out all day, Spinnaker Records, sold our tapes and helped to actually get our stuff distributed by larger record distros. And the local skateshop, The Boarding House, where we would also hang around all day and basically scare off customers, kept our tapes in the normal rotation of music that was played there. Andy's dad donated some of his drums for us to beat the hell out of; god knows my parents dealt with our noise and antics every day; Zac's mom vouched for us when we set up a huge show; our friend Shane MacKenzie freely gave us his own money to start Scary Barn Records with in the first place; our surfer friends let us play our first show at their house (making us play our set twice); and I know that, at least once, our flyers and tapes were made with other people's donated money.

Eating pizza and playing with The Monsters in the Scary Barn were some of the best times I can remember.

We recorded this tape with my boom box in the Scary Barn, October of 1996.

Chances are that our friends were sitting around eating pizza while we recorded.

We recorded this one on a 2 channel tape deck. Despite an improvement in sound quality compared to Meet The Monsters, the performance can be horribly sloppy.

This collection is all rare, mostly unreleased stuff, including some funny outtakes.

Tracks #10–13 originally appeared on an alternate version of Evil Zombies, called For The Freaks, which was only available to members of the Monsters Freaks Club.

The Love Muffins was one of the more involved of the many humorous small bands I had in middle school. I played a makeshift drum set (see diagram) and my friend Zac Davis-Kelly (formerly of ForceFedGlass, Hassan I Sabbah, FYA) played guitar and sang.

The only shows we played, if any, were very small – more like parties.

We recorded a demo tape in my bedroom with friend Craiger, but never really produced too many copies of it.

One highlight on this tape is a collaboration song with Craiger on bass and vocals.